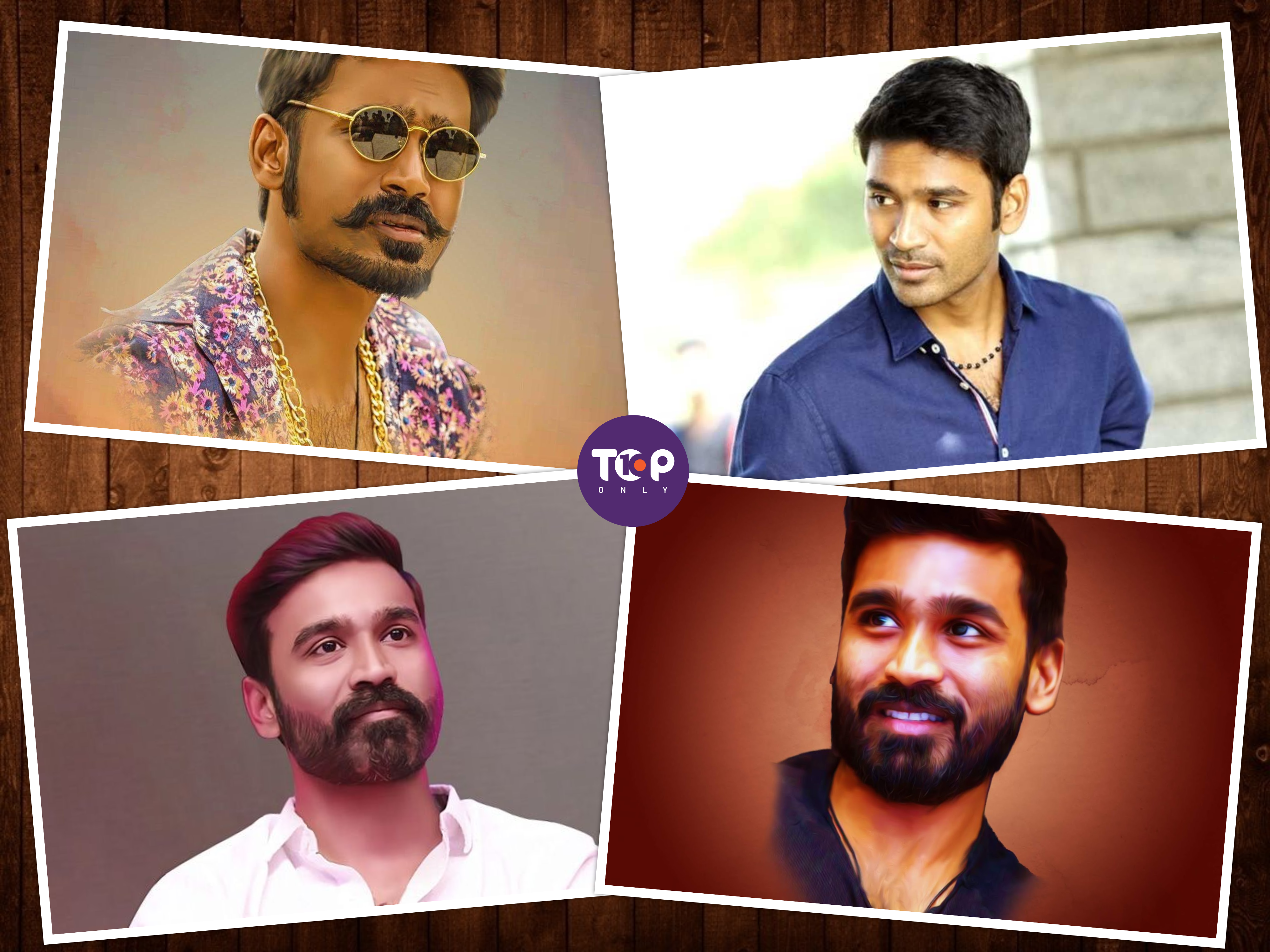 Laughter is the best stress buster. Thankfully our movies give us plenty of that. Watching a comedy movie that sends you in splits is the best way to spend time together with family. Want to pick the best of the lot? Though many heroes have tried their hand at comedy, very few have made it their own.

One such is Venkatesh Prabhu Kasthuri Raja, popularly known as Dhanush, the popular South Indian Tamil actor. Here at Top 10s Only, we have tried our best to compile the Top 10 Tamil Comedy Movies of Dhanush. If you are a fan of the man or a lover of the comedy genre, here is a list that you shouldn’t miss. Though his film cast includes some of the best comedians in the business, Dhanush himself has it in him to tickle our funny bones.

Here is the list of top 10 comedy movies of Dhanush to enjoy. Are these part of your list of best-watched? Let us know in our comments. Let’s go…

Just a reminder that the list is compiled and not ranked as we cannot pick our favourites from the best! It is listed according to the date of release.

Thiruda Thirudi is Dhanush’s first blockbuster hit in the comedy genre. The foot-tapping ‘Manmatha Raasa’ became the show stealer even before the movie hit the theatres. Apart from the fast beat dance number, Thiruda Thirudi easily fits into the all-time list of Dhanush comedy movies in Tamil. The story revolves around a lower-middle-class boy Vasu (Dhanush), an irresponsible brat who runs into the leading lady Viji, in the quirkiest of situations. A traditional and ambitious girl Viji (Chaaya Singh), literally gives him a run for his money. The love-hate relationship between both in ‘Tom n Jerry’ style gives way to hilarious situations. With a fast-paced screenplay that will leave you in splits, Thiruda Thirudi, as the name suggests, is a stealer of sorts. Apart from the leading duo, Karnuas, Krishna, and the rest of the crew add to the fun ride. If you haven’t yet watched it, add it to your watchlist right away!

Alongside the very best on the top Dhanush best comedy movies list is Thiruvilayadal Aarambam. No matter the number of times you watch, it will still leave you in splits! Dhanush as Thirukumaran portrays a simple young lad with a carefree attitude aspiring to become a businessman. He falls in love with Priya (Shriya Saran), the sister of a wealthy business tycoon Guru portrayed by veteran actor Prakash Raj.  Thiru pledges his love to Guru to help himself raise capital for his business that eventually propels him to become a successful businessman. Wit combined with an innocent face becomes Dhanush’s arsenal in this fun roller coaster. The cat and mouse game between Thiru & Guru is the crux of the movie that provides a lot of laughter all the way. Some catchy dialogues and situational comedy adds to the humour. If you want to go on a fun ride, this is the movie you would like to watch.

Padikkathavan is one of Dhanush’s most popular comedy movies. The irony of being a 10th-grade dropout in a family of high literates, Dhanush just owns the role of Rocky.  In his desire to marry a well-educated girl, he meets and falls in love with Gayathri (Tamannah Bhatia), a don’s daughter from Andhra. When Gayathri is forcefully moved to her father’s den, Rocky follows her with the help of Late Padma Shri Vivek, intending to bring her back and marry her. The comedy legend Vivek plays a faux don, and the events unintentionally going his way among real goons is a laughter riot. Right from their travel, stay and eventually confronting the dons of the land, Vivek’s expression and humour sense are noteworthy. The comedy sequences of Dhanush and Vivek are a mix of casual humour and sarcasm that’s hilarious, to say the least. Overall, Padikkaathavan is a worthy family entertainer.

Kutty is the remake of the Telugu movie Arya. Dhanush plays Kutty and the lead lady Shriya Saran plays the role of Geetha. This movie enters the Dhanush top 10 comedy movies list in Tamil due to the witty logic of Kutty, who daringly declares love for a girl who is already in a relationship. Once again, Dhanush makes an impact as an easy-going college guy who is a mix of innocence and perseverance. With some street smart thinking and random puns, Kutty ends up winning not only the lead woman’s heart but also ours. This romantic comedy that breezes through is just the dose you need to lift your spirits.

Uthama Puthiran is the most top rated Dhanush comedy movie to date. The story moves around a young chap Siva (Dhanush), who accidentally kidnaps Pooja (Genelia D’Souza), a bride-to-be from her wedding. In the quest to win over both the families while preventing Pooja’s maternal cousins from marrying Pooja, the couple falls in love. The sequence of events that play out leads to many hilarious moments. With a star-studded lineup, Uthama Puthiran doesn’t have a single dull moment. The cherry on top is Late Padma Shri Vivek, who essayed the role of Emotional Ekaambaram to perfection. With plenty of comical twists and turns, Uthama Puthiran impresses – a mood lifter that can be watched once every now and then.

Dhanush’s Maappillai is a remake of the 1989 Rajnikanth starrer. Saravanan (Dhanush) is a fearless young ruffian who, due to a sequence of events, falls in love with Gayathri (Hansika Motwani) and marries her against her mother’s wishes. Gayathri’s mother (Manisha Koirala) plays the antagonist. The tug of war between the mother-in-law and son-in-law forms the story. Once again, Dhanush’s combo with Late Padma Shri Vivek just sets the tone for a comical ride. Here again, Vivek as JP just elevates it to another level. With a good sense of humour and a well-scripted storyline, it ends with a happy note.

Naiyaandi that revolves around the love of Chinna Vandu (Dhanush) and Vanaroja (Nazriya Nazim), offers a complete family humour package. Due to the turn of events, the couple secretly marries, and Vanaroja enters Chinna Vandu’s home, pretending to be an asylum-seeking orphan. With Chinna Vandu’s elder brothers falling in love with her, the couple’s dilemma while playing along with the family leads to many hilarious situations. Soori, Sathish, and Imman Annachi add to the flavour. If all that you want is light-hearted comedy entertainment, Naiyaandi is your thing.

Vellayilla Pattadhari or VIP is one of the best of Dhanush’s top 10 Tamil comedy movies. Dhanush as Raghuvaran and Amala Paul as Shalini play the leads. VIP with an exciting storyline that showcases the importance of following your passion as a career choice. Though the storyline has plenty of moral value and showcases the harsh realities of unemployed engineering graduates, it never lacks humour. Dhanush just has his way of pulling things off. Much like his previous comedy genres, partnering with Late Padma Shri Vivek brings out the best in him. VIP is apt for those who appreciate a good storyline with lots of fun elements.

Maari, the local goon, was one of the best hits of Dhanush that showcased him in a light-hearted comedy role. With Kajal Agarwal playing the female lead Sridevi, Maari had a lot of fun elements on offer. From being a local don to romancing without being obvious, Dhanush has aced this role. Robo Shankar as his sidekick, Dhanush, just packs a punch being a comedy villain despite being the protagonist of the story. Some goon-humour ably supported with the hyped body language of local goons makes it a good entertainer. If you are a lover of fast beats, Anirudh’s music is sure to lure you if not for comedy and entertainment. Overall, Maari is a fun-packed goon humour that you’ll love.

Pa Pandi is one of those Dhanush movie names that ring a bell in the comedy genre. Though it has a fair share of sentiments, it is embedded with lots of humorous scenes throughout. After his wife’s demise, the old Pandi (Rajkiran) goes in search of his lost love, Poonthendral (Revathy), with the help of his grandchildren. The flashback takes us to the younger version of the couple played by Dhanush and Madonna Sebastian. These well-scripted scenes add to the humour quotient while driving home the message that the heart yearns for companionship and rightfully so with age. With a perennial flow of comedy, Pa Pandi brings not just laughter but also many understanding smiles.

Now that you have it all feel free to unwind after a hectic day with one of the top 10 comedy movies by Dhanush, the popular star for people of all ages. Have you seen them all? Did we miss out on any of your favourites? Do let us know in the comment section below.

Likewise, if you would like to read our Top 10 romantic movies of Thalapathy Vijay or Thala Ajith, feel free to do so too!