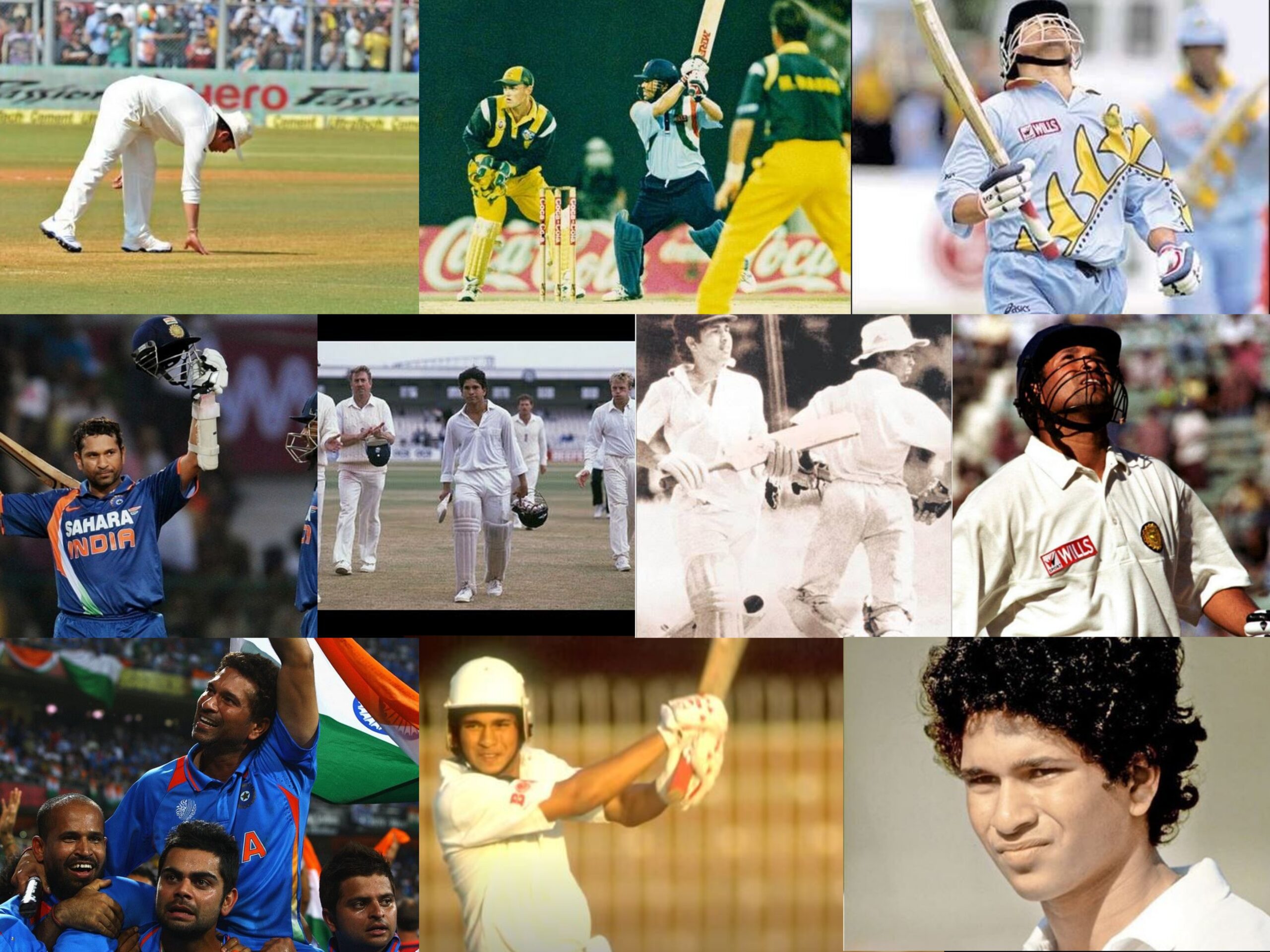 A million hearts beating to the same tune S-A-C-H-I-N…S-A-C-H-I-N in repeated mode, a billion prayers across faiths, shouts & screams, tears of joy, name it, you got it all….in 24 years, a nation’s dream & hope – Sachin Tendulkar is not just a name, he is an emotion! To pen down just a few lines about the Little-Big man is an insult to this icon, but to do justice to the given time and space, I restrict my words to the best that I can.

Started off as the shy boy from the grounds of Mumbai, the teenage sensation went on to make the best of bowlers bow down before him. There is plenty to talk about, but here I am picking on Top Ten Moments of Sachin Tendulkar that’ll always be etched in memory, today, tomorrow and long after we are all gone! This I write as a tribute to the Master on his 47th Birthday, while wishing him many more good years of a happy & prosperous life.

In the tournament organised by the MSSA (Mumbai School Sports Association) Sachin and his pal Kambli piled on a record 664-run partnership for Shardashram Vidya Mandir. This record was a head-turner of sorts and became the platform for Sachin’s future endeavours. Though the MSSA had done away with the historical document, the partnership that set the platform for greater things to come will always be special.

At 16 years and 205 days, Sachin became the youngest Indian to take the field in a test match against the heavily loaded pace battery of Pakistan. That baby-faced young lad with curly hair and plenty of determination was not just another batsman. Walking out to bat with Azharuddin at the other end, he was India’s ray of hope with India in a transition period as the big guns of batting were either retired or in their sunset years.

The 16-year-old Sachin who handled the wrath of Waqar Younis as he bled in the test match, stood up to the Best Pakistan Spinner of that time – Abdul Qadir who was more than twice his age! That one over where he smashed Qadir for 6, 0, 4, 6, 6, 6 piling 28 runs in a rain-curtailed exhibition match, set the tone for the greatness to come. It was on this day that the talented teenager became the ‘Boy Wonder’.

A day before India’s 44th Independence Day, chasing 408 for a victory India was staring down the barrel at 127/5, in walked Sachin. England was sensing a victory when Sachin along with Manoj Prabhakar ensured it didn’t happen. Facing the likes of Lewis, Fraser, Malcolm and Hemmings, the then 17-year old Sachin made his 1st international ton. As he lifted his bat in acknowledgement, the awe of the English was quite a sight! Little did we know that 99 more would follow suit in his 24-year saga.

Having scored 4 tons out of the 7 ODIs played against Australia in 1998, the Desert Storm innings is an image that defined the Grit of the ‘Little Guy’! It was Sachin against the top-ranked ODI side all the way! India was fighting for a place in the finals, while Australia won all the round-robin games, was through already. With a sand storm brewing in the desert, there was one that blew the likes of Kasprowicz, Fleming & Warne into the stands. Though play was suspended, Sachin stood his ground, did not budge was determined to take India across the line. Though he fell just short of the target, he ensured that India made it to the finals in his knock of 143. He produced yet another master class 2 days later, on his birthday to win the Coca-Cola Cup.

Battling a back injury, Sachin’s singlehanded effort almost took India into the threshold of victory only to lose the match by 12 runs. Though coming at a losing cause, Sachin’s commitment was 200% against the arch-rivals. While the entire batting card fell like nine pins, Sachin held fort in his knock of 136. When trying to enforce a win, he smashed Saqlain for a couple of boundaries before falling for him. It was heartbreak for Sachin and Indian fans but nevertheless a day that defined his legacy.

India’s shocking loss earlier to Zimbabwe showed how much India depended on Sachin. Inspite of the sudden demise of his father, his commitment to the nation was more; he was back in England within 3 days of his dad’s last rites. Sachin’s 140 against Kenya and his bat lift to the skies with tears in his eyes ignited the waterworks for a million Indians watching him! His agony was felt, the pain was evident. On that emotional day, the legend crossed over to become the God of Cricket!

On the 22nd anniversary of his record partnership innings with Kambli, Sachin scaled yet another milestone. Being a record breaker of all sorts in batting, Sachin etched his name in the record books yet again while smashing the first-ever ODI double ton in the history of the game against the visiting Proteas. The speciality of this knock apart from the record is that it came at a time the ‘Endulkar’ tag was trending among critics. Thus, it comes as a special moment and as usual, Sachin let his bat do the talking!

Sachin’s dream-come-true moment of India lifting the ODI World Cup in 2011 is something to cherish for a lifetime. The Indian team lifting him on his shoulders was the moment that befitted the emotions of a billion Indians as the country erupted in celebrations. As iconic as the winning moment was to see the Pride of the Nation being paraded around the Wankhede. As Virat aptly put it, “he had carried the burden of the nation for long, it’s time we carried him” – this moment was also an indicative of the great man handing over the baton to the younger boys.

Sachin’s historical career that spanned for 24 years came to an end on his 200th test match, a day after his 24th debut anniversary in international cricket. Fittingly his farewell innings came in his hometown, the city that nurtured him to be the man and cricketer he is. The image of him paying his respects to the 22 yards and the tears said it all. The farewell speech was something else! As he started off with “My Life between 22 yards for 24 years…” there wasn’t a dry eye in the stadium. The God of Cricket finally hung up his boots, thanked everyone who made his playing days a possibility and wished the best for the younger brigade. Touching the heart of every cricket lover, his words weighed heavily long after he was done. On that day, India finally learnt to live a life without Sachin on the cricket field. The post-Sachin era of Indian cricket thus began.

Amidst a pandemic that the world is facing today, I write this article with the love and respect that I have for the man I started watching cricket for. Today as he celebrates his 47th year around the sun, I would love to thank him for all the dreams, memories, tears, heartbreaks, moments that made and touched millions of lives. In our hearts, you shall live forever! Long live your legacy!