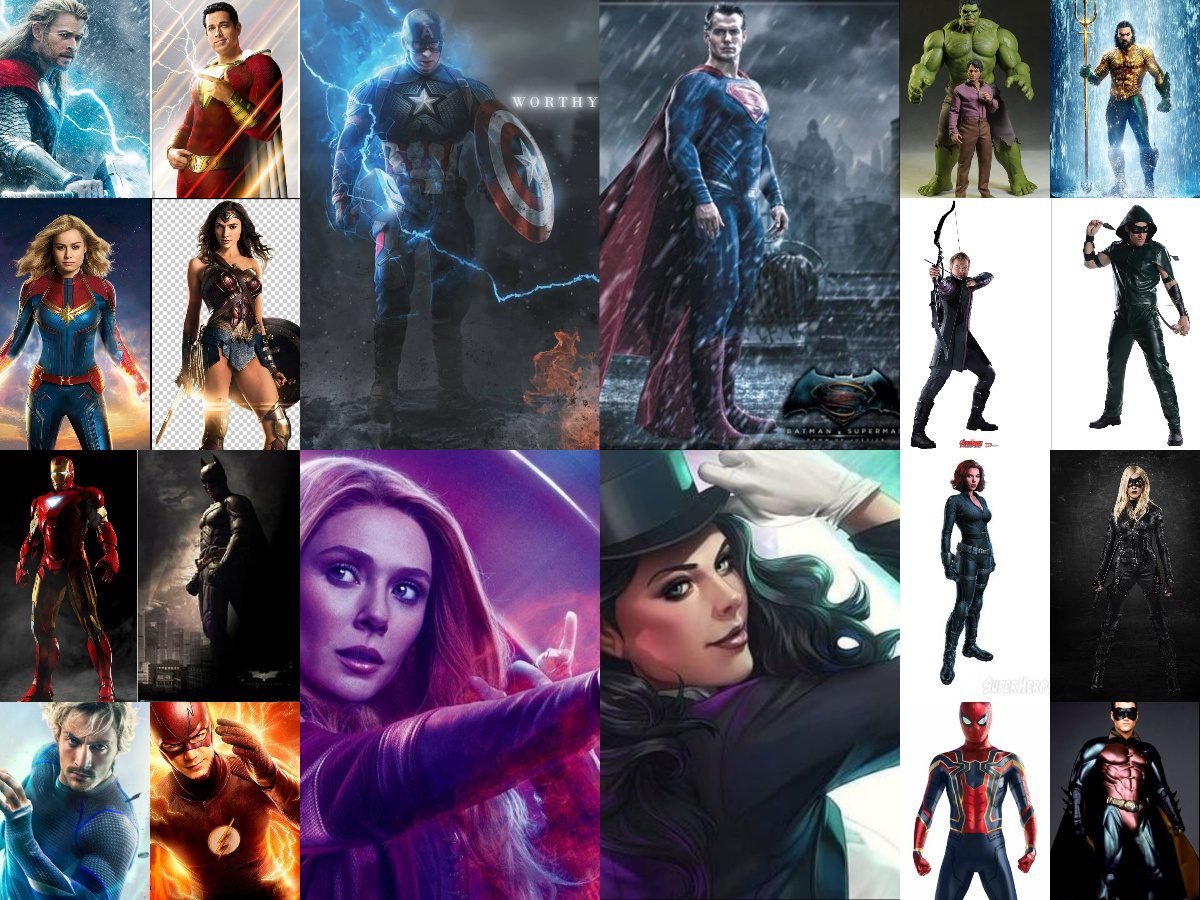 If you are a comic book fan, then I am sure you will be familiar with the names of Comic Stalwarts Marvel and DC. If not, don’t worry, I hope you are a movie buff and understand the world of Avengers and Justice League and that will do. Marvel and DC have over the years established themselves as pioneers in making characters that can come to life as you read them. Most of them stay in our hearts even long after we finish the book. Here are some of the Top 10 Marvel Characters and who can replace them from the DC Universe.  In my opinion, these counterparts would be ideal if a ‘Swap’ was to happen. Did you read it as ‘Snap’? Well, there you are – already taking sides, I didn’t!

No top 10 Marvel vs DC matchups will ever be complete without these two big names. It is a very odd comparison but both of them are calm and composed even though they have superpowers. Both came back from the Dead – I am referring to the deep sleep of Captain America in The First Avenger movie and the return of Superman in the Justice League. Symbolically, they are also in Red and Blue!

These names are a must in any top 10 DC heroes vs top 10 Marvel heroes as the comic is incomplete without them. Iron Man and Batman are filthy rich and have all the time, money and knowledge to make it big in their respective genre. If it is the Iron Suit for Iron Man, it’s the Bat Mobile for Batman. So, I feel that they are very much similar to each other. Both can fly – one in red and another in black!

Thor is a definite name in any of the top 10 Marvel heroes lists and should be a part of the list here too. How can Captain Marvel of DC / Shazam be compared to him? They both do have a cape and a deep voice! Thor is the God of Thunder and has enough power to yield the Nidavellir Star to create Stormbreaker whereas Shazam has the power of Seven Gods and he is one of them!

Black is not the only thing that is common between these two characters. Both of them are strong women with the deadliest fighting skills. Though the Canary cry that Dina had inherited from her mother gives her a slight edge over Natasha, the latter’s combat skills compensate for it. Be it the fight sequences or giving up her life for her friend, Black Widow is a definite part of any top 10 heroes in the Marvel and DC universe. Only Black Canary can come close to being a replacement for her.

With a Bow & Arrow, both these characters have a lot of similar traits, similar suits and similar skills. Even their temperament is surprisingly similar. The only difference between Hawkeye aka Clint Barton and Green Arrow aka Oliver Queen is from where they came and from where they currently are. When it comes to skills, Hawkeye is a definite part of the top 10 Marvel or DC superhero movies. He is a lot more trained in bow and arrow and also with the use of a sword. Still, no other character in DC can come this close to being similar to Hawkeye.

Till the entry of Captain Marvel into the Marvel Comic Universe, Wonder Woman was considered as the most strongest and powerful female character in comics. With the advent of Captain Marvel, who is more powerful and has the capacity to travel to other universes, without any doubt, she has taken a strong place in the top 10 Marvel characters of all time. There is no apple to apple comparison here but if there is a vacancy for this position in Marvel, then only Wonder Woman can adorn her role.

Quicksilver may not be one of the top 10 best marvel heroes but he definitely has a place in our hearts for sacrificing his life to save Hawkeye. As the name indicates, he can run as fast as lightning and so does Flash. When it comes to speed, Flash is faster than Quicksilver, still, their characters are very much similar to each other.

Two more similar characters – Marvel’s Scarlet Witch and DC’s Zatanna – both have the capacity to lift things without touching them. Wanda, Scarlet Witch uses her mind and Zatanna uses her wand. Both these characters have enjoyed their powers from a very young age. Zatanna got her powers from her magician father whereas Wanda was a successful experiment in a lab. Both of them use their powers to save the world and hence the right match.

Robin was Batman’s Spiderman! I hope you get the meaning of this sentence. Spiderman was a teen who was selected by Iron Man to become a part of the Avengers Gang, whereas Robin is a teen who volunteers to help Batman in his missions. Both of them are good at playing second fiddle to one of the top 10 marvel heroes of all time and one among the top 10 strongest and powerful dc heroes. Robin and Spiderman have a skill of their own but need the guidance of their mentors to excel in their fields. Since they are teens, they need a senior to give them fatherly advice and keep their enthusiasm in check. Both of them evolve into their better selves with time.

I hope you enjoyed reading about these close-to-the-heart characters in Marvel and DC Universe. Do you think the comparison is right? Would you prefer some other DC character for the Marvel Heroes mentioned here? Please leave your thoughts in the comment box below!