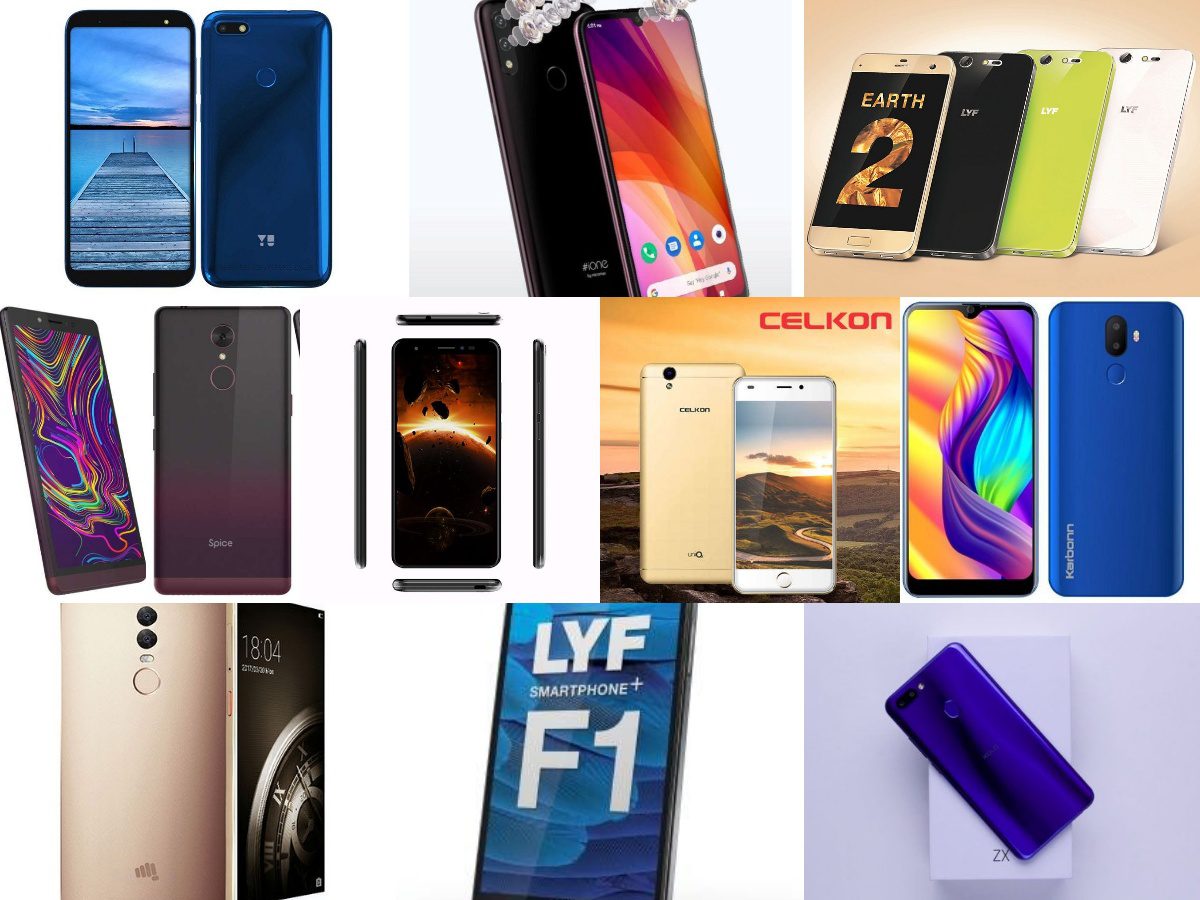 History buff or not, every Indian would be aware of the Swadeshi movement in the pre Independence era. It was considered as an economic strategy to get rid of the British and promote nationalism and Indian products. After more than a century, India is again back on the same track after being a great proponent of globalization until now. The ongoing coronavirus pandemic has made us rethink our economic strategy and has forced us to become more self-reliant and start manufacturing products ourselves.

The Indian government in its stimulus package is also pushing for the same and as a consumer, we can also help this initiative by buying local. One product that comes to mind to promote this initiative is the smartphone segment. Indians love phones going by the number of models and brands launched daily. Instead of buying those other country-make phones anyway do not last for more than a year (or we don’t keep it for long), why not try Indian phones? Here is a list of such top 10 Smartphones made in India that are worth a look.

Micromax started off as a software company in the year 2000 and later ventured into the mobile business. Headquartered in Gurgaon the company started manufacturing low-cost phones with the best features. By 2014 it became the 10th largest smartphone company in the world apart from being listed among the top 10 Indian brand mobiles. Though it has slowed down its smartphone operations it is still very much in the market. One such handy device is the Micromax Dual 5.

The Dual 5 comes with a handy 5.5’’ display which is neither too small nor too big. The phone is armed with a Qualcomm Snapdragon 652 processor which is known for its smooth multimedia performance. It has adequate internal storage of 4GB RAM and 128GB internal storage. It has a 13 MP front and rear camera with a battery capacity of 3,200 mAH. It runs on Android 6 and comes with a dual SIM and has a fast-charging feature. As per user and critics review, the smartphone can produce high-quality photos and has a good battery.

This phone is equipped with a 1.25 GHz Octa-core processor and has a touchscreen HD display of 6.09”. It comes with a handy 3GB RAM, internal storage of 32GB expandable up to 64GB, and a handy battery capacity of 3950 mAh. The iOne Note runs on Android 9.0, has a dual rear camera of 13 MP and 2 MP, and a front camera of 5 MP for selfies. The phone has a plastic body that is sturdy. It is one of the best budget phones which has a quality camera and long-lasting battery. The iOne Note can be listed among the top 10 Indian camera smartphones.

This Indian company started its operations in 2009 by manufacturing mobiles and later diversified itself to making smartphones and tablets. Karbonn is headquartered in Delhi and is a joint venture with Bangalore based United Telelinks, Ltd. Apart from India, the company has branches in Europe, Middle-East, Sri Lanks, Nepal, and Bangladesh. It had gained a good reputation as a leading manufacturer of mobiles and was among the top 3 companies to bring Andriod One to India.

The Titanium S9 Plus is the company’s latest smartphone in India released in January 2020 and can be counted among the top 10 Indian smartphone brands for the features it offers. The USP of the phone is that it has all the bells and whistles the smartphone is supposed to have, yet the price is affordable. The phone has a dual camera of 8MP, 2MP rear camera, and 5 MP front camera which can take beautiful selfies. It has a large display of 6.1” and a battery of 3000 mAh. It runs on a 1.5 Hz quad-core processor and hence performs optimally. The phone has a fast unlock fingerprint sensor for better privacy. This dual-sim phone with a face-unlock feature is a good option if you are looking for a budget phone with all the essential features.

Lava International started its operations in 2009 and was among the very few Indian smartphone makers. It started off by making budget-friendly phones and this strategy was hit. It was among the top 10 smartphones in the Indian market in the budget segment until the Chinese brands bombarded phones even in that segment. The company is headquartered in Noida, Uttar Pradesh with branches in Nepal, Indonesia, Mexico, Sri Lanka Bangladesh, Middle East, and Russia. Lava International has also set up R&D and product testing in China.

The Z91E is the latest offering from the stable of Lava International. The phone runs on Android Oreo and has a decent RAM capacity of 3GB with built-in storage of 32GB. The phone has a full HD touchscreen display of 5.45”. The full display will be appreciated by gamers and people who watch movies on mobiles. The device has a 3000 mAh battery and is powered by a 1.5 GHz quad-core processor, a 5 MP front camera, and 13 MP Rear Camera with flash. The mobile was expected to get launched in Feb 2020, but due to the current situation, the exact release is yet to be declared.

Xolo ZX is a smartphone that has a touchscreen display of 6.22” with Gorilla glass protection. The RAM comes in 4GB and 6GB variants. The battery capacity is a decent 3260mAh which can last more than a day. The camera is featured-packed with a 13MP rear camera, a dual front camera of 5MP, and 16 MP for selfies. The mobile runs on a MediaTek Helio 2GHz octa-core processor, Android 8.1 has an internal storage of 64GB expandable up to 256GB. It has a face unlock feature that offers great privacy to its users.

Lyf is popularly known as Reliance LYF. This smartphone is manufactured by Reliance which is a Mumbai-based company launched in 2016. It manufactures 4G-enabled VoLTE smartphones and is available with Jio SIMs. Lyf phones are rated among the top 10 Indian mobile companies thanks to the popularity of the Jio network.

These phones run on Android, and the phones come loaded with many Jio apps. There are 4 sub-brands of smartphones namely, the Earth, Water, Wind, and Flame.

Earth 2 is a smartphone that runs on Lollipop 5.1 and is powered by a Qualcomm Snapdragon 615 Octa processor. It is a dual-sim phone with 4G support for both slots but only one slot can connect to a 4G network at a time. The smartphone has a feature-packed camera with a 13 MP front and rear camera and takes great selfies. Earth 2 has 5” touchscreen display with, 3GB RAM and internal memory of 32GB, and expandable to 64GB. It has a battery capacity of 2500 mAh with a talk-time of 14 hours on 4G.

It is part of the Water element series and has a 5.5” full HD display with a Gorilla Glass protection for the screen. The F1 has dual-SIM functionality and is slim and lightweight and has a separate slot for microSD cards. The phone is equipped with Snapdragon 617 and can expect a good performance. It supports 3GB RAM, internal storage of 32GB has 16 MP rear and 8 MP front camera. The F1 runs on Android Marshmallow and has a battery capacity of 3200 mAh which makes it good for performing all the required activities on the phone.

The YU Televenture is a subdivision of Micromax Informatics and is an online-only venture which is sold on Indian eCommerce sites.

Yu Ace is a budget dual-sim smartphone that comes with a 5.45” touchscreen display. It has a relatively huge battery of 4000mAh and is powered by a 1.5GHz quad-core MediaTek processor. It comes in 2GB and 3GB variants with an internal storage of 16GB and 32GB and runs on Android 8.1. Coming to the camera, it has a 13 MP rear camera and 5 MP front camera for capturing selfies.

Spice is part of the Spice Mobility Ltd and started manufacturing budget mobile phones. It gradually moved to make mid-range phones and made its foray into the market with a dual-mode phone. Among the budget phones that were launched the most recent is the Spice F311.

This dual-SIM phone has a 5.45” touchscreen display and is powered by a quad-core MediaTek processor. The battery though not massive by the current standards is adequate and is 2,400 mAh. It has 1GB RAM, internal storage of 16 GB expandable to 32GB, and runs on Android 8.0. It has a 5 MP camera for selfies and a 5 MP rear camera with auto-focus.

Celkon is an India phone manufacturing company that was found in 2009. It started off assembling tablets and phones in China and Taiwan but later built its own manufacturing plant in Telangana. Headquartered in Hyderabad it has many overseas branches in Sri Lanka, Nepal, Singapore, Bangladesh, South Africa, Zimbabwe, etc.

The UniQ is among the latest smartphones launched by this company. It has a touchscreen display of 5.0” and a resolution of 720×1280. The phone runs on Android 7.0 and has a battery capacity of 2700 mAh. The UniQ has 3GB RAM with storage of 32GB expanded up to 128GB. The phone sports a rear camera of 16 MP and a front camera of 8 MP for selfies. Expect the phone to perform optimally as it has a 1.3GHz quad-core.

Which is the best Indian smartphone brand is hard to tell as it depends on many requirements. The smartphones listed above as top 10 are not as a mobile expert but as a mobile enthusiast highlighting made-in-India phones. The objective is to make readers aware of the Indians brands and make them consider buying local mobiles and help Indian companies compete in the global market. In terms of specs and features, these phones are no less than foreign brands but are also affordable. So why not give one of these mobiles a try?

2 thoughts on “Top 10 Smartphones Made in India”