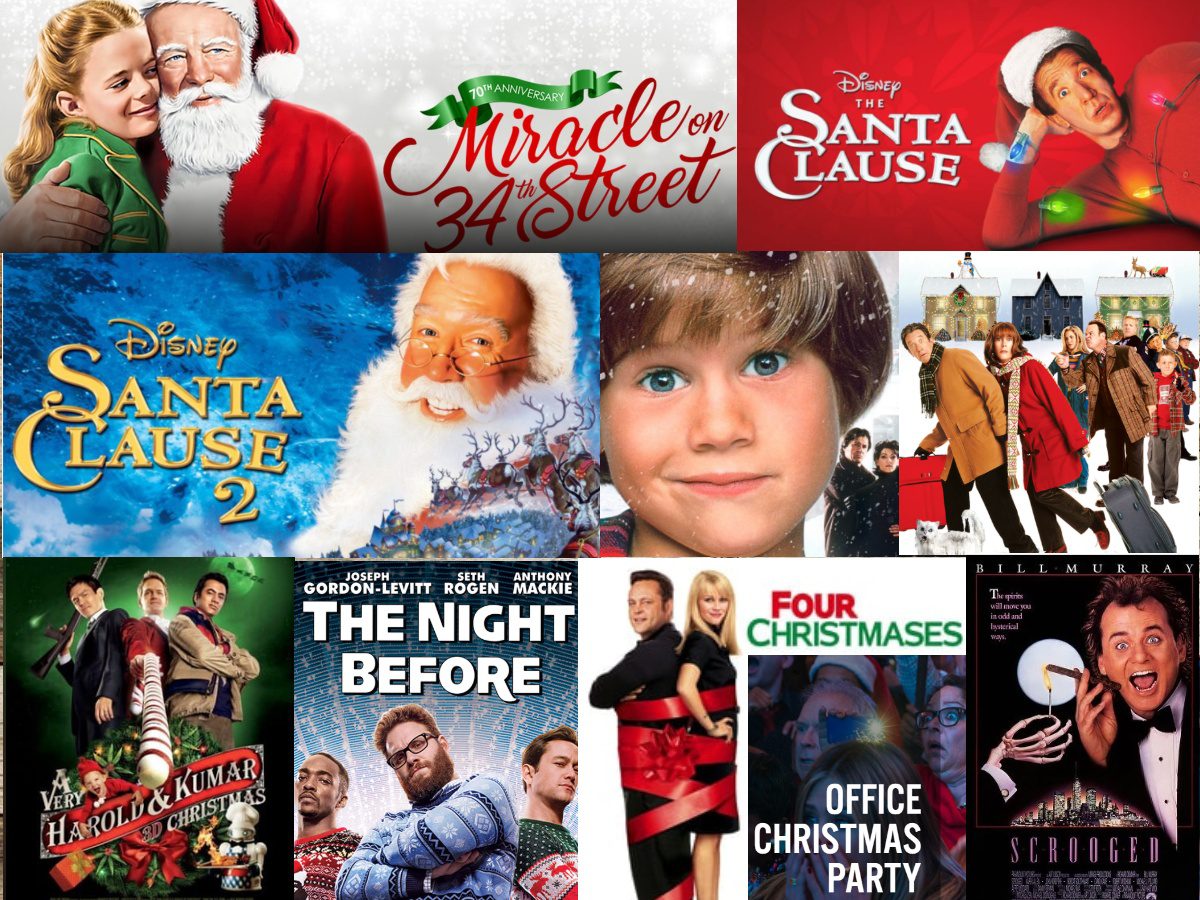 Every year new Christmas movies are released by the movie industry one after the other. While some fizzle away and are not to be heard from again, some turn into iconic classics to be watched every Christmas thereafter. Here is a list of the best top 10 must-watch comedy Christmas movies that are pure entertainment. We promise you hours of laughter and entertainment. The age-rating of each movie has also been mentioned to help you decide if it is suitable for the audience on hand or not.

The Santa Claus movie of 1994 stars the extremely talented Tim Allen. If you have been a fan of his TV shows, you will love this movie! It is about a man, Scott Calvin who accidentally causes Santa Claus to trip off the roof on Christmas Eve. Scott and his son help out Santa Claus with the rest of the deliveries for the night before Christmas. However, in a twist of events, Scott now gets anointed as the next Santa Claus, leading to several hilarious incidents. Watch this movie to find out how Scott played by Tim Allen desperately tries to convince his family that he is indeed Santa Claus! One of the most popular comedy Christmas movies that were released in the 90s, The Santa Clause will leave you in splits from laughing too much. Rated PG, this movie can be enjoyed by kids and adults alike.

After the roaring success of The Santa Claus (1994), it is no surprise that a sequel was released in 2002 starring Tim Allen as Santa Claus. The Santa Clause 2 takes us to eight years after the events of the first movie had transpired. We soon find out that Scott, played by Time Allen has to take a wife in order to continue being Santa Claus. And to top it all off, his son from his first marriage seems to have found his way to the naughty list. So we follow Scott as he attempts to fall in love and convince his girl that he is indeed Santa Claus. He also needs to convince her to get married before Christmas arrives. Rated PG, this movie makes it to the top comedy Christmas movies for the family. So whip up some snacks and sink into your couch for an amazing movie!

Home Alone 3 is the third movie in the Home Alone movie series. Did you know that the Home Alone movies are considered the best Christmas comedy movies of all time by movie critics? Well, Home Alone 3 tells us the tale of young Alex Pruitt who convinces his parents to leave him at home since he has measles. Our protagonist is an innovative young kid who manages to foil international spies as they try to steal a top-secret computer chip that seems to be hidden in his new toy car. Rated PG, this movie is sure to be a hit with the family.

A Very Harold & Kumar 3D Christmas is the third movie in the Harold & Kumar series. It is a stoner comedy movie that has been rated R, making it suitable for an 18+ audience. This movie takes us to six years after the Guantanamo Bay escapade. Harold and Kumar have gone their separate ways and seem to have wound up with different friends, families, and lives. However, this Christmas, Kumar arrives at Harold’s house leading to plenty of typical Harold & Kumar incidents that are hilarious. They find themselves in pursuit of the perfect Christmas tree to pacify Harold’s father-in-law. This movie deserves its spot on the list of Top 10 Comedy Christmas Movies for grownups!

Miracle on 34th street is a staple Christmas movie in most homes across the world. Released in 1994, the movie tells us the story of six-year-old Susan Walker. Raised by her mom, she is taught not to believe in fairy tales, Susan does not believe in Santa Claus anymore. She doesn’t expect the gifts on her Christmas gifts unlike other kids her age but all of this changes when she meets a special Santa Claus at the department store who is convinced that he is the real Santa. Voted as one of the best comedy Christmas movies, Miracle on 34th street is a must-see movie this Christmas season. This movie is rated PG making it suitable for kids and adults alike.

Comedy Christmas Movie No. 6: The Night Before

If you are looking for good comedy Christmas movies, you have hit the mother lode! The Night Before was released in 2015 and stars Joseph Gordon-Levitt, Seth Rogen, and Anthony Mackie. They play the roles of Ethan, Isaac, and Chris who are childhood friends. They have a tradition of getting together every Christmas Eve for a night of hilarity and debauchery. As they have grown older, they decide to make the tradition as memorable as possible by setting out for the Nutcracker Ball, apparently the best Christmas party in town. This movie is rated R and suitable for an audience of 18+.

Comedy Christmas Movie No. 7: Christmas with the Kranks

This movie is based on the novel Skipping Christmas by John Grisham. It tells us the story of Luther and Nora Krank who decide to skip Christmas this year by forgoing the annual festivities they usually throw and go on a cruise instead. However, this is easier than done. Their neighbors and friends are unhappy with this decision and the Kranks find themselves in a corner. On the top of every list of comedy Christmas movies, Christmas with Kranks is a fun movie to watch with friends and family. This movie has been rated PG. Watch the movie to find out how the Kranks attempt to pull off a Christmas with just a few hours to spare before their daughter arrives with her fiancé.

Four Christmases starring Reese Witherspoon, Vince Vaughn, and Mary Steenburgen was released in 2008. The movie tells us the story of Brad and Kate, a young couple who enjoy being together but have no intention of marriage or kids in the future. They decide to spend their Christmas in Fiji. However, their plans change as they wind up having to spend four separate Christmases with their two sets of divorced parents. Brad and Kate soon remember the things they love about family and Christmas. This movie has been voted one of the best comedy Christmas movies. This movie is rated PG-13 and contains some adult humor and language.

Office Christmas Party starring Jennifer Aniston, T.J Miller, and Jason Bateman was released in 2016. The movie tells us about how the Chief Technical Officer and his employee attempts to throw an extensive Christmas party to impress a potential client. They do this in order to stop their branch from being closed down by the CEO. This movie tops every comedy Christmas movie list with its outrageous jokes and funny situations. This movie is rated R and not suitable for people below 18 years of age.

Scrooged released in 1988 is another popular adaptation of A Christmas Carol by Charles Dickens. This movie tells us the story of Francis, a mean television executive who alienates everyone around him with his mean behavior. However, on Christmas Eve, he learns the true meaning of Christmas after being visited by the three ghosts. Watch the movie to find out whether Francis turns over a new leaf or not. With Bill Murray cast in the leading role, it is no wonder this movie is considered one of the 10 best Christmas comedy movies. This movie has a PG rating, making it suitable for kids.

These movies are sure to keep you occupied this Holiday Season as you laugh your way through each of these movies. So laugh till your belly hurts and remind yourself about the true spirit of the season. If you are looking for movies that you can watch with your family, check out the Top 10 Christmas Movies for the Family. Don’t blame us if you find yourself glued to the screen this Holiday season!