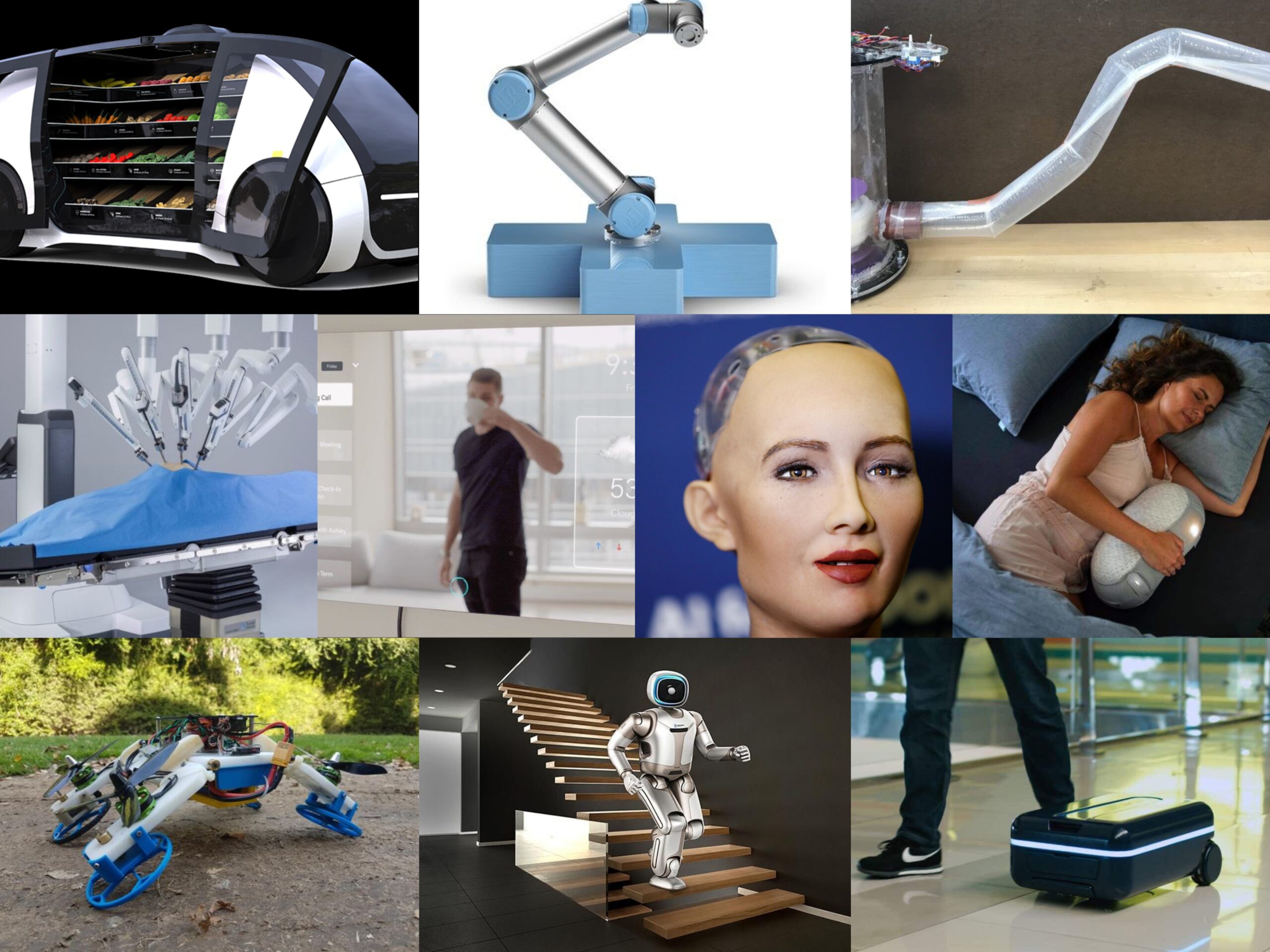 Robots have transformed the manufacturing and industrial sector in the past decade and are slowly spreading its tentacles in the other parts of the businesses including our homes. Robots in the last few years have become commonplace in the automobile and electronic industry and are seeing increased adoption in retail, distribution, and healthcare too. Soon robots will be used to perform even the most basic tasks as they need less time, make fewer errors and are more cost-effective. Here is a list of the Top Ten Innovations in Robotic Technology to watch out for:

The Robotic suitcase is a novel travel companion that is built to follow the owner just like a pet friend. It is an autonomous suitcase that is designed to follow you around wherever you are. It uses the latest robotic technology and AI to accomplish this task. It has a GPS tracker that helps to track your location and roll along your side without the owner having to lug it around. It uses artificial intelligence to solve complex problems like predicting the path and also avoiding obstacles.

Many companies have started manufacturing this smart suitcase with each one having different and useful features. Some of the common features are, they have a face-recognition software built-in along with a wide-angle lens so that the device can trace and tag along with the user. It can travel up to a speed of 7 miles per hour and also features a tracking algorithm. The device comes with a wristband bracelet for the user to easily track the luggage if it is left behind or goes out of range. This is a hands-free device and is a major advantage as you have one less thing to carry and worry about.

Any robot which can move around using the arms and legs is considered a walking robot. This robot is seeing many innovations and variations which include bipedal robots, hexapod, quadruped, etc. The latest update to this long list of robots is the Walker. It is an intelligent humanoid service robot that has many capabilities and functionalities. This robot walks like a human and can even hold a yoga pose with great stability showing off its motion control feature.

Many industries are relying on robots to reduce the chances of human error and increase the quality of products or services. The healthcare industry does not want to be left behind in technology adoption and has started using robots for surgeries. These robots also help in reducing fatigue of the surgeons and aid in performing procedures that require great precision. These surgical robots have been constantly being upgraded with the latest technologies so that they can perform more complex procedures.

The latest on the list of the surgical robot system is the da-Vinci. This is not an automated surgical system but a robot that is controlled by a human doctor. The device is constantly being improved and it currently has better elbow and wrist control than before. That helps in holding up to three surgical instruments at a time. The major advantage is, the surgeon can use the tiny tools of the robot to make perfect incisions.  It has better visuals and helps to get valuable information. The robot uses infrared imaging to get clearer pictures that the normal human eye cannot and this helps the robot perform complex procedures.

The robotic arm is an industrial robot designed to perform repetitive manufacturing work. These robots handle tasks that are either too boring, difficult or dangerous for humans. A typical robotic arm has metal segments that are joined by 6 segments each making up for an arm. Robots are seeing greater applications due to the use of artificial intelligence.  The industrial robots which were until now not known for adaptability to even small changes have seen smaller and lighter robots in the form of UR3 arm. It is built to perform automated workbenches and small assembly tasks on the fly. It is a compact table-top robot that weighs around 11 kgs and can do a full 360-degree rotation on the end joints and all the wrist joints. It works collaboratively with humans and is flexible and lightweight. Moreover, it is safe and easy to use and can reduce the workload of an employee by half. It is useful where safety, cost, and size are critical factors. It is also easily programmable so it can switch to agile manufacturing, giving better ROI.

Another new arm that is making news is the “Blue” which is a low-cost VR headset controlled robot. It can carry heavy loads and can be pushed or pulled. It is safe to work with and has the capability to learn from physical human actions. It is also designed to be compatible with any AI software.

Are you having trouble falling asleep or have irregular sleep cycles? Sleep robots can help you! Developed by a company called Somnox this robot can help you sleep better. It is a sleep bot that is shaped like a huge peanut. It is touted that it can enhance sleep quality by regulating breathing and through the use of audio, it helps you sleep faster.

The device is programmed to mimic a human’s breathing. When the user hugs the peanut-shaped device, s/he can feel the rise and fall of the robot’s body. That has a calming effect on the user and the breathing starts to match the robot’s slow breathing. The slow and low breathing sound creates a soothing effect that relaxes the mind and aids in sleeping.

The sleep robot comes with an app that is used to configure the breathing pattern, the time the robot has to be active at night and also comes with an alarm clock for optimal sleep.

A fan of science fiction would greatly appreciate a mirror that can do more than just reflect a face. Today, it is not a fantasy but a reality. Smart mirrors are magic mirrors that can talk back to you. These devices have features that have gesture controls, face and voice recognition and give advice from skincare to playing your favorite music. It is similar to other apps on your smartphone and uses the camera to gather images and study.

Inspired by the growth of organisms and plants, researchers have come up with the latest robotic innovation which is called a tubular robot. Like a sweet pea or a climbing vine, this robot navigates through its environment and grows its tips. The growth direction is based on what it senses in the environment it is in. This type of machine can turn out to be extremely useful in places where there are constraints to reach the destination. For example, clearing an arterial block by rummaging through the fat accumulated in it or using it in search and rescue operations by using its ability to extend the reach.

The other advantage of this robot is, it is safer than hard robots. It is lightweight and is useful in situations where it has to work with a human closeby. Moreover, it is designed to solve complex paths and is highly flexible making this growing robot an extremely useful one.

Are you frustrated standing in the checkout waiting for your turn? You may soon not only quit waiting in a long queue, but even a trip to the grocery becomes redundant. An autonomous vehicle designed to bring the things you need to your doorstep is being worked upon by a startup company called Robomart. The company is planning on leasing this technology to retailers so that they can fulfill grocery orders. This autonomous vehicle can travel at a speed of 25 mph. The interior of the vehicle has a heating and a cooling system and even comes with different sections just like a grocery store.

These professional service robots are designed to act similar to a human, which includes interactions also. These robots are great at automating the tasks in a cost-effective manner and also boost productivity. They offer a wide range of commercial applications including disaster response in dangerous situations in power plants, inspection, and maintenance. The humanoids can take over the manual and laborious tasks including taking over tasks of astronauts in space.

It is also designed to have an emotional quotient through empathetic intelligence and can work with the sick and elderly. Sophia is one such humanoid, that can have intelligent conversations and even crack a joke!

Researchers are working on robots that can not only fly like a typical quadcopter but can land and drive through rough terrain. It can also squeeze through the tight spots that are considered too dangerous for a human to enter. These hybrid robots called the FSTAR (Flying Sprawl-Tuned Autonomous Robot) can fly over or under any obstacles and can transform themselves from a quadcopter to a car. The robot can adjust its width so that it can run or crawl on flat surfaces or squeeze through pipes or tunnels. This low-energy consuming robot can run at a speed of 8ft per second. It is useful in places of longer working time. The possible application and uses of robots are in entertainment, filming, military, agriculture, law enforcement, and maintenance.

Robotics Engineering & Innovation is going ahead at a great pace with a new invention happening often. Every company is trying to outdo the other in terms of the range and quality of products. That is good news for us!

Which types of robotics interest you? Which robot would you like to lay your hands on first? Let us know in the comments below!