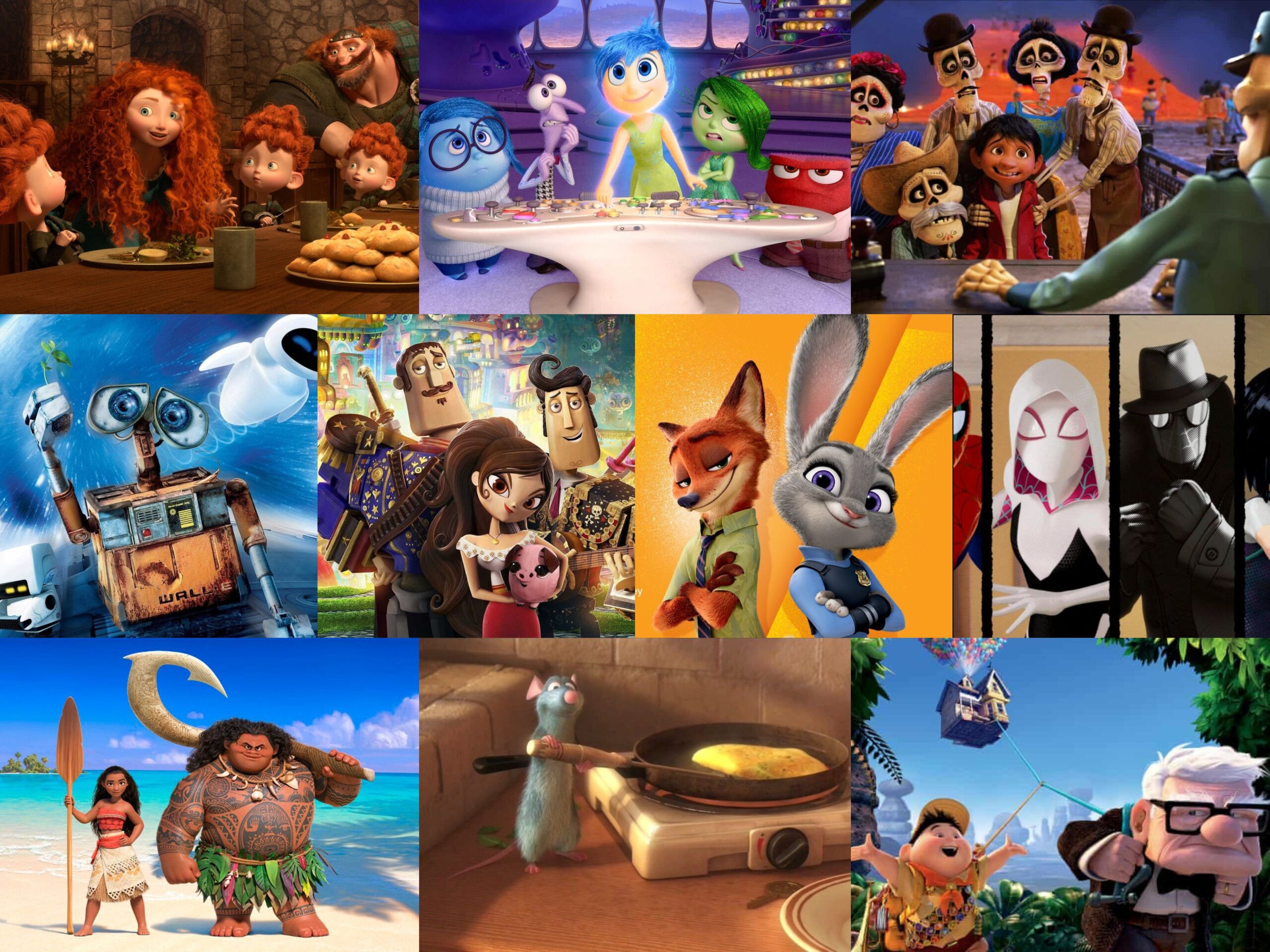 Visual storytelling is an art form that has been passed on through generations, right from the time Early Man drew his story on the cave walls. The entry of pioneer cartoonists like Walt Disney took things to the next level, thus paving the way for the production of the animated films that we all so love and enjoy today. With the advent of 3D computer-generated animation, fantastic tales are now told with a depth and richness that was previously unthinkable! We are now treated to almost life-like characters, exotic locales, and incredible storylines. So, grab a box of popcorn, sit back and relax while we take a quick look at our chosen Top 10 Stand Alone Animated Movies since Y2K.

“Anyone can cook” became a catchphrase once this 2007 film hit the movie theatres and set the box-office aflame with its awesome collection of $626,549,695!

Directed by Brad Bird, Ratatouille follows the path taken by the story’s protagonist Remy to accomplish his life-long ambition to become a chef. There’s only one problem – Remy is a rat! Remy (voiced by stand-up comedian and actor Patton Oswalt) has an acute sense of taste and smell and his culinary interest is sparked by Parisian chef Gusteau. A series of events lead Remy to Gusteau’s restaurant. The film focuses on his friendship with Gusteau’s son Linguini and how they manage to outwit the conniving head chef, Skinner.

Ratatouille was an outstanding visual experience with its attention to even the minutest of details such as the rats’ fur, kitchen sequences, and so on.

An all-time favorite, this 2008 animated film from Pixar Animation Studios still has a loyal fan following. Set in the 29th century, WALL-E is a treat for sci-fi aficionados who love watching futuristic movies.

WALL-E explores many themes – love that transcends space and humanity, man’s wanton exploitation of Earth’s resources, health risks from consumerism and sedentary lifestyle, and so on. One of the highlights of the film was its focus on body language. Robotic characters like WALL-E and EVE had specific sounds and mannerisms, while human characters were given limited dialogues.WALL-E won the Award for Best Animated Feature Film at both the 81st Academy Awards & at the  66th Golden Globe Awards.

UP is a bittersweet tale, involving an unlikely friendship between Mr. Carl Fredricksen (voiced by Ed Asner), a cranky and stubborn senior citizen who is bent on fulfilling a lifelong ambition, and an enthusiastic boy scout Russell, who is determined to save an endangered, exotic bird from the ruthless hunter/collector Charles Muntz (voiced by Christopher Plummer).

UP had many viewers tearing up right at the beginning of the film with its poignant portrayal of the romance between Mr. Fredricksen and his wife Ellie. Left widowed and alone, he is determined to save his house from demolition by flying off with it to Paradise Falls. The film shows how his outlook on life changes when he encounters Russell, Kevin, and Doug during his trip and realizes that despite his loss, he still has his own adventure to follow. The 6th highest-grossing film of 2009, UP’s overall collection amounted to $731,463,377. It also won the Oscar for Best Animated Feature and Best Original Score at the 82nd Academy Awards.

This is the animated movie that broke the notion that it takes a prince and a fairy-tale romance-wedding for a princess to get that coveted happily-ever-after ending! Brave focuses on the exploits of the Scottish Princess Merida, her defiance of age-old customs and how she ultimately proves that our destiny lies within us and that we truly do need to be only “Brave” enough to see it!

The Book Of Life

Released in 2014, The Book Of Life was co-written and directed by Jorge R. Gutierrez, and distributed by 20th Century Fox. With a star-studded cast comprising of famous actors like Channing Tatum, Zoe Saldana, Ice Cube and Christina Applegate, this musical fantasy had a box-office collection of approx. $97,651,543.

Set in Mexico, this fantastic tale is a testament to the fact that true love never dies. It starts with a simple bet between the God-couple Xibalba (Ron Perlman) & La Muerte (Kate del Castillo) regarding the love life of the protagonist Manolo Sánchez (Diego Luna). The film then follows Manola as he travels through the underworld to gain his lost love by facing his deepest fears.

Ever heard of the adage “Don’t let your emotions run away with you”? Well, in this 2015 Disney Pixar movie, 11-year old Riley attempts to do just that!

This innovative film centers around the personified emotions that live inside the young girl’s head. The protagonists – Joy, Sadness, Anger, Fear, and Disgust – try to guide her as she goes about adjusting to the shift from her hometown in the Midwest to San Francisco. The film ultimately emphasizes the importance of every memory (both good and bad) in developing a person’s character.

With an overall collection of $857,561,711, Inside Out was 2015’s 7th highest-grossing movie. It was awarded both the Golden Globe Award (Animated Motion Film) and the Academy Award for Best Animated Film-2016.

What if humans never existed? Then, the animals would have evolved! Zootopia is a brilliantly-crafted animated film that explores a world sans humans and populated only by anthropomorphic animals.

With an ensemble cast of established actors like Ginnifer Goodwin, Jason Bateman, Idris Elba, etc. this 2016 movie follows the adventures of self-righteous Judy Hopps, the first bunny police officer in Zootopia as she teams up with a sly con-artist fox Nick Wilde. Together they must solve the case involving the disappearance of 14 predators within 48 hours. If they fail, Judy faces expulsion from the police force.

Zootopia offers a close look at how prejudices permeate through society and why it’s necessary to rise above such biases. Zootopia was awarded the Golden Globe Award (Animated Motion Film) & the Academy Award for Best Animated Film-2017 and has an overall collection of $1,036,368,248.

Released in 2016, Moana is a tale of self-discovery and persistence. Produced by Walt Disney Animation Studios, this spectacular ocean-themed film was directed by Ron Clements and John Muskermarks.

It marks the debut of Auliʻi Cravalho as Moana, the Polynesian princess who must sail across the ocean to find the goddess Te Fiti and restore her life-giving heart, a pounamu stone that was stolen by the shape-shifting demi-god Maui (voiced by Dwayne Johnson). The film focuses on the mismatched partnership between Moana and Maui and how their relationship slowly progresses to friendship and trust.

What’s more important- your ambition or your family? This is the choice that 12-year-old Miguel must make in the spectacular visual, musical treat that Coco truly is!

Spider-Man: Into the Spider-Verse

What’s so special about this movie?

For starters, this 2018 film was the first animated feature film in the Spider-Man franchise. Second, instead of Peter Parker, we have African-American-Puerto Rican teen Miles Morales donning the mask of the friendly neighborhood Spider-Man! Produced by Columbia Pictures and Sony Pictures Animation in association with Marvel, Spider-Man: Into the Spider-Verse features an alternate storyline set in a shared multiverse. In short, we get to see as many as 5 versions of Spider-Man from alternate dimensions!

The film was a box-office hit and won both the Academy Awards and the Golden Globe Awards (2019).

Well, these animated movies were our pick for the Top 10 stand-alone animated movies from Y2K. Each of these films has brought laughter and tears to us movie-buffs, and in the process, we may have even picked up a few life lessons that were tucked in them!